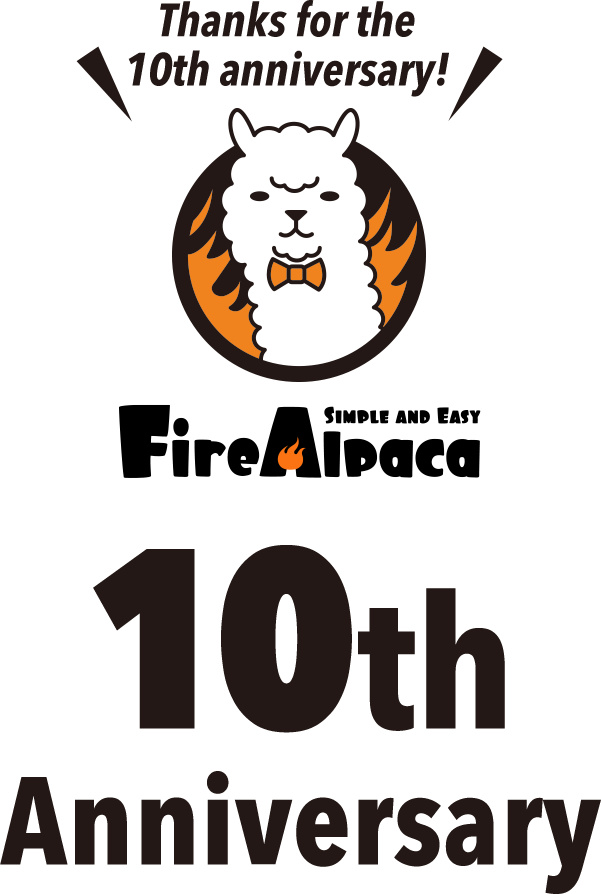 We look forward to your message for FireAlpaca 10th anniversary.

Thank you very much for your message!

Thank you very much for your continued support for FireAlpaca.

Your message will go public after approval.

In the early 2011, we came up with an idea of offering a program that could be fully or partially free of cost on the background of rapidly growing Internet and Smartphone. That’s how we started the ‘FireAlpaca’ project.

Around that time, posting an original illustration to internet has become popular, and digital production environment has been popularized. Various graphic programs have been released, that gives users to choose from many options.

Meanwhile drawing an illustration digitally became popular and the number of users increased worldwide especially among the younger generation, however, it was still quite challenging to set up a digital environment, such as PC and the rest of peripheral equipment.

We believed that everyone should have an opportunity to be creative and release digital artwork to public. And fostering diverse and enriched ‘drawing’ culture will contribute to the development of digital illustration industry.

This is how the graphic software ‘FireAlpaca’ was born. It supports 10 languages, is compatible with both Windows and Mac platform, has high performance, and is free of charge.

‘FireAlpaca’ has been used by many users from various generations worldwide, and we have been supported by sponsors in order to continue developing software.

We truly appreciate each and every FireAlpaca users’ artworks and messages sent from all over the world in past 10 years, that grew and encouraged us tremendously.

While wishing more creators will enjoy FireAlpaca to produce their artwork, we will do our best to develop FireAlpaca better than ever by listening to every users’ comment and suggestion.

Thank you very much for your continued support.

We hope to share the 20th anniversary with all of you and new users.

FireAlpaca has been used in 217 countries.(by Google Analytics). This means that FireAlpaca is being used in almost entire world.

FireAlpaca is launched approx. 100,000 times per day. Today, Someone uses FireAlpaca somewhere in the world every day.

A running total number of users since 2015 is 6.5 million. It’s like a population of large city.

How many questions can you answer correctly?